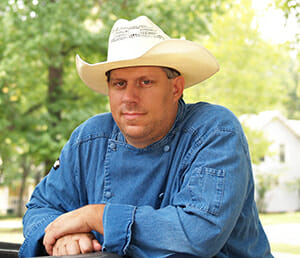 Brad Johnson began his culinary pursuits learning country cooking from his grandmother and mother in Asher, OK.  After attending OSU, he moved to NYC to work for The Riesse Organization in their new TGIFriday’s division. To further his culinary knowledge he attended Culinary Institute of America in Hyde Park, NY.  Following graduation in 1995 he returned to Oklahoma, with his family, to teach at OSU in the Culinary Arts department.

Through his association with OSU he met and began to work for Hal Smith of Hal Smith Restaurant Group as their Executive Chef.  He has developed the menus for some of the company’s most successful concepts, including Charleston’s Restaurant, Mahogany Prime Steakhouse, Redrock Canyon Grill, Upper Crust, Louie’s and Toby Keith’s I Love This Bar and Grill.  In 2007, Brad purchased the spice company, The Allen Oliver Group, from Allen Oliver, and has successfully built the company to one of the favorites among BBQ restaurants across the country.