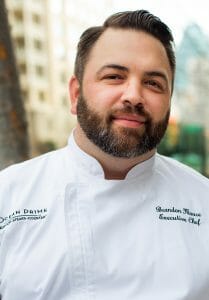 Brandon Moore is the executive chef at Ocean Prime in Dallas.  He moved to Dallas 5 years ago from Michigan where he was born and raised.  He took his first restaurant job at 15 and was drawn in almost immediately.  A thirst for knowledge and experience led him through concepts ranging from fast casual to fine dining and everything in between.

While in culinary school at the Culinary Studies Institute in Farmington Hills Michigan, Brandon participated in the competition team, earning silver and gold medals in American Culinary Federation competitions at the state and regional level.

After culinary school Brandon took a position on the line at Ocean Prime in Troy Michigan and worked his way through the ranks to sous chef.  Shortly after being transferred to Dallas in 2013 he was promoted to executive sous chef and eventually executive chef.  When not at work, Brandon enjoys spending his time exploring Texas and relaxing with friends and family.