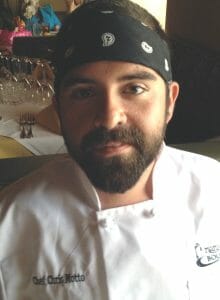 Growing up in south Louisiana, Chris Motto was surrounded by some of the country’s best food at an early age. Not a weekend would go by without a bbq, crawfish boil, fish fry, or sunday dinners at grandma’s. It was then he began to realize the power of good food to bring people together and celebrate life. not knowing at the time that countless hours of helping around the kitchen would lead to his future passion and career.

After graduating high school, Chris moved to Baton Rouge to attend Louisiana State University where he would obtain a degree in political science. While in college he worked in several restaurants to finance his continuing education. Now he uses his skills in politics to deal with the daily operations involved in running a restaurant.

In 2009, Chris joined the team at Mansur’s on the Boulevard and was promoted to executive chef a couple years later. Using his Cajun upbringing along with the freshest possible ingredients and the wealth of knowledge learned through years in the business, Chris continues to help this staple restaurant prosper. A happy chef makes a good sauce and it is evident that he truly enjoys his career path with recent success in local cooking competitions.