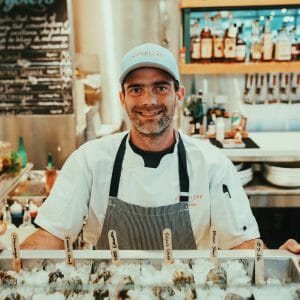 Chris Hill has been in the restaurant industry since he got his first job at 13 as a dishwasher at a local hotel in his hometown of Jefferson City, Missouri. After washing dishes for a few years he started expanding into prep and working on the line. He really enjoyed the rush of working in a fast-paced kitchen and feeding people good food. At the age of 20 he went to San Francisco for culinary school at the California Culinary Academy. He was not around much food growing up outside of holiday gatherings so he was blessed to get to go to culinary school there and experience the vast culinary scene that San Francisco has to offer. After graduating with an associate of science degree he moved to Monterey California and worked at a French inspired restaurant. He loved French inspired sauces and techniques.

He took some years off to build his family before moving to Dallas, Texas. It was a perfect setting to get back into the culinary scene. After working under chefs like Graham Dodds he started to appreciate the importance of farm fresh ingredients and the relationship between farmers and chef. He carried that over when he moved to work at Wolfgang Puck’s 560 restaurant in reunion tower working under Chefs Patton Robbertson and Jacob Williamson. There he got to see the meaning of fusion. French inspired sauces and techniques melded with Asian flavors and ingredients to create fantastic dishes.

Meat and the butchering of proteins has always been something he enjoyed. That was behind his motivation to get a job at knife working under Chef John Tezar. While there, butchering more exotic meats, he was able to have his eyes opened to the art of dry aging meats and the changes it undergoes during the process.

These are all factors that have made him the chef he is today. Using farm fresh ingredients and sustainable foods to create great flavorful dishes.