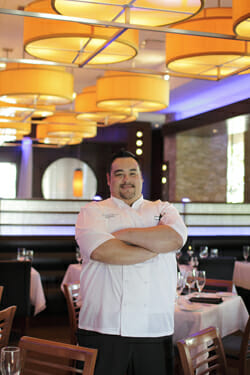 Experienced in providing excellence within the Ocean Prime family, Sonny Pache is returning to Ocean Prime Dallas after leading Ocean Prime Philadelphia as executive chef. Pache has been an integral part of the Ocean Prime brand since July 2009 after joining Cameron Mitchell Restaurants (CMR) in May 2004.

Throughout his tenure with CMR, Pache spent almost four years in Dallas where he opened Ocean Prime as executive chef and was known for his community involvement. He competed twice in the American Institute of Wine and Food’s Annual Caesar Salad Competition against 12 chefs and was named champion in 2012. He also was named executive chef of the year for CMR in 2011 and was selected to participate in the Dallas Cowboys Stadium Chef Showdown in 2011 and 2012. Pache became an operating partner of CMR in 2012.

Originally a business major, Pache’s spent many nights cooking for his six college roommates who encouraged him to go to culinary school. Pache took their advice and began at Columbus State University, but his natural ability landed him an apprenticeship at the Columbus Fish Market and was there for a year and a half before being offered to continue his apprenticeship at CMR’s fine dining concept M. It only took Pache eight months to become the executive chef at M. Although he never finished culinary school, Pache says the most valuable lessons he has learned have been from his co-workers who teach him something new every single day.

Pache was raised in Southern California, but his family embraced their Filipino roots, with family gatherings and celebrations enjoyed at home instead of in restaurants. Pache’s mom was constantly experimenting with new recipes and ingredients in the kitchen, and her passion for cooking eventually trickled down to Pache