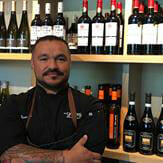 Michael Ortiz is an Austin native, who discovered that cooking was his true passion at a very young age. He moved to Scottsdale, AZ after culinary school and immediately worked his way into a Sous Chef position at Eddie V’s. After spending a few years at Eddie V’s DC Ranch restaurant Chef Michael had the opportunity to grow with the company and moved back to Texas to their sister restaurant Wildfish in San Antonio. There he honed his culinary skills with Chef John Carver, learning that quality is the key to success. Chef Michael was then given the opportunity to open Urban Grille at The Westin hotel at the Domain as the restaurant chef. There he developed systems and created the menu, including room service, for the 400 room hotel. Chef Michael then decided to use the skills he learned to join the family at The Grove Wine Bar-Kitchen in 2010. Building on what he experienced, he opened three other Grove Wine Bar locations and oversees all four of the kitchens. At The Grove Wine Bar-Kitchen, Chef Michael continues to develop his chefs and culinary team while instilling his principles of quality and passion in his team.