The lifestage of a salmonid between egg and fry. An alevin looks like a fish with a huge pot belly, which is the remaining egg sac. Alevin remain protected in the gravel riverbed, obtaining nutrition from the egg sac until they are large enough to fend for themselves in the stream.

Fish that live part or the majority of their lives in saltwater, but return to freshwater to spawn.

Aquacultured finfish and shellfish are harvested from a controlled environment in which they have been raised to market size from fingerling or larval stage. For example, salmon are grown in ocean pens, while catfish and tilapia are raised in freshwater ponds or tanks on land. Mollusks like oyster and mussels are grown in systems that suspend them off the ocean bottom. Shrimp are farmed in ponds worldwide. In aquaculture operations, water quality and feed and carefully monitored. Farmed fish and shellfish are usually processed and shipped within hours of harvesting. As such, the quality of product is typically excellent. Aquaculture also offers a consistent, year-round supply and greater price stability than wild seafood.

This is a method used for capturing shellfish, primarily scallops, clams, oysters and mussels. A dredge is essentially a metal “rake” that’s dragged across the ocean bottom, scraping up shellfish and anything else in its path. The shellfish are collected and held in a chain-mesh bag. Dredges vary from hand-operated to much larger, hydraulically operated versions like those used for harvesting sea scallops and surf clams.

The act of salmon fry leaving the gravel nest.

A juvenile salmonid that has absorbed its egg sac and is rearing in the stream; the stage of development between an alevin and a parr 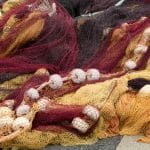 Gillnets entangle target species like salmon and sharks by their gills when they get caught in the invisible mesh. The mesh size determines the size of the fish captured. The advantage of this method is its efficiency; its disadvantage is that it kills on capture, sometimes compromising the quality of the product, and can result in bycatch and “ghost” fishing by lost nets.

The hooked jaw many male salmon develop during spawning

To attract fish, baited hooks are attached to a single longline, which is then set either along the bottom of the ocean or at a depth nearer to the water’s surface (depending upon the target species). The ends of the set are marked by buoys and, in the case of bottom longlining, anchored to the bottom. Mahi mahi and swordfish are two examples of species that are taken, in part, by surface longlining; halibut and cod are examples of fish species taken by bottom longlining. The advantage of this method of harvest is that fish are brought aboard one at a time, usually while they’re still alive, and processed quickly to ensure quality. It’s a selective method, reducing bycatch.

Also known as fingerling. A large juvenile salmonid, one between a fry and a smolt.

Pots, or traps, are fished on the bottom from single lines and buoys, with one pot per line, or from longlines, with several pots to a string and buoys marking either end of the “set.” Lobsters and most crab species are captured by single pots. A wire lobster pot may weigh less than 10 pounds, while a king crab trap can weigh 500 pounds. Pot fishing is highly selective, and the product is landed alive for maximum quality.

Schools of fish like herring, mackerel and tuna are encircled with a net, which is then “pursed” at the bottom, trapping the fish. The filled net is hauled back to the vessel through a power block; when it’s alongside the vessel, the fish are usually “brailed,” or pumped aboard with a suction hose. The quality of seine-caught fish is a function of the volume of the catch.

A juvenile salmonid which has reared in-stream and is preparing to enter the ocean. Smolts exchange the spotted camouflage of the stream for the chrome of the ocean.

The material which comprises a stream bottom.

A large cone-shaped net, held open by huge plates (called “doors”), is dragged through the water, scooping up everything in its path. The fish end up in the rear section, or cod end, of the net. There are two kinds of trawling: bottom trawling (in which the net is dragged across the bottom) and midwater trawling. Trawling is designed to harvest large volumes of groundfish species like Pollock and flounder. Disadvantages include damage to the fish because of the sometimes heavy tonnage hauled up in a single lift of the net and bycatch of non-targeted species of fish of the wrong size.

Baits or lures are dragged behind a vessel as it moves through the water. With salmon trolling, as many as six wire lines are lowered from the boat, with “cannonballs” (lead balls) holding each wire perpendicular to the hull. Off each trolling wire, as many as 20 leaders, with bait lures attached, are pulled through the water. The main lines are reeled in and out by hydraulic gurdies (spools). Albacore trolling consists of a dozen or so feathered jigs, each on a single line, skimmed along the surface. The advantage of troll-caught fish is quality. One fish is hooked at a time, cleaned and bled, then stored in ice or frozen onboard.