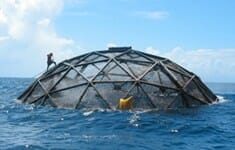 A little more than two weeks ago, Kampachi Farms announced the initial results of its offshore fish-farming technology, in which kampachi, a yellowtail relative, is grown out to market size in drifting, spherical net pens that are towed through powerful eddies by tender vessels in order to reduce the environmental impact of its operations, in comparison to anchored sites. The amount of towing time is an ongoing area of research.

“The overall goal of these efforts is to reduce mankind’s footprint on the seas, by transitioning toward a more nurturing relationship with our seafood,” said Sims, the co-founder and co-CEO of Kampachi Farms, a title he shares with Bullock.

“The Kona Blue operation made some tremendous advances in marine fish production,” said Sims. “We grew over 1 million pounds of Kona Kampachi® per year at that site, with no measureable impact on the environment beyond the immediate net pen area. We are very proud of these accomplishments, but we want to continue to strive for improvement. Kampachi Farms is focused on where we go next.”

Other “next generation” projects that Kampachi Farms is undertaking include the development of new marine fish species culture methods for the imperiled native Hawaiian grouper and for herbivorous nenue, or rudderfish, that might be fed with locally cultured limu or algae, instead of more expensive imported pellet feeds.

The company is also looking into further re-formulating fish feed formulas to reduce the reliance on anchovies and sardines that commonly comprise fish feed, something that Kona Blue Water Farms was always experimenting with. Kampachi Farms is looking at American agricultural proteins like soybeans, proteins extracted from microalgal biofuels by-products, or effluents from fish processing or other food processing plants.

Kampachi Farms also hopes to drive the global expansion of responsible culture of sashimi-grade fish. The company is focused on an immediate opportunity to expand production of kampachi into the Sea of Cortez.

Sims said there are several advantages to this location: deepwater sites for lease; excellent water circulation; protection from exposed ocean conditions; road access to major U.S. seafood markets, which reduces shipping costs and reduces the carbon footprint; and government programs and policies that encourage the development of responsible, sustainable aquaculture.

“The world needs more seafood,” said Sims. “As there is increasing population growth, greater global affluence and increasing recognition of the health benefits of seafood, we are going to see greater pressure on wild stocks. We need to find more scalable sources for our sushi. But we need to not just grow more seafood: We need to also learn how we can grow more seafood better.”

Sims and the Kona-based research team will focus on the next-generation R&D, while Bullock will lead the Mexican growth opportunity.

The other major shareholder in Kona Blue will continue to retain the rights to the Kona Kampachi® brand. The former Kona Blue offshore farm site and hatchery in Hawaii are now operated by Keahole Point Fish, a company affiliated with the manufacturers of the submersible Sea Station® net pens.