Introduction to the Oyster

In addition to being tasty with nuanced flavors and appropriate for a wide variety of dining styles, oysters can be one of the most sustainable options on any menu and are increasingly being turned to as a tried and true solution to many of the ecological issues affecting oceans and waterways. 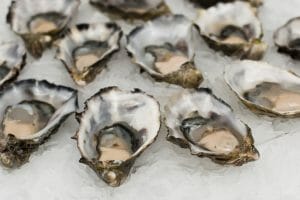 The ancient Romans enjoyed oysters over 2,000 years ago and oyster shells are commonly found today in Roman archaeological sites. Oyster popularity in North America really began to boom in the mid 1800’s to early 1900’s when railroads began linking inland population centers with major oyster markets including New York City, Baltimore, Philadelphia, and New Orleans. In the 1890’s, oyster harvests began to decline due to over harvesting and habitat destruction.

In response to the decline, more sustainable practices began to be adopted which included returning used oyster shells to the water to serve as attachment sites for a new generation of shellfish. According to the East Coast Shellfish Growers Association, cultured shellfish are one of the most environmentally friendly food-production systems available today. Benefits to the environment provided by modern shellfish aquaculture include improved water quality, increased habitat areas for fish, crabs, and other organisms, and increased diversity of species.

Adding Oysters to Your Menu

Oysters are appropriate for casual dining, fine dining, hotels, and resorts / clubs. Unlike most shellfish, oysters can have a fairly long shelf life of up to two weeks, though their taste becomes less pleasant as they age.

Oysters may be served many different ways; common forms include fried, grilled, or raw.

Sourcing Oysters for Your Restaurant

The largest oyster-producing body of water is Chesapeake Bay on the Eastern coast of the United States. Large beds of oysters are also found along the US Gulf Coast and internationally off the coasts of Japan and Australia. Fruge Seafood sources oysters from within the United States and offers both Gulf and Chesapeake Bay oysters depending on availability.

Working with a distributor that sources their oysters from a variety of locations is essential in order to maintain consistent menu offerings as oyster availability is highly susceptible to interruption due to weather and water conditions.