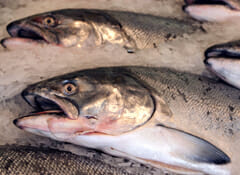 Think all seafood purveyors are the same? They’re not. In fact, “seafood fraud” is shockingly prevalent in the U.S. Researchers with the non-profit group Oceana have harnessed the power of forensic science to confirm that as much as half of all seafood sold in the U.S. is mislabeled.

“Results from our DNA lab show that about half the time the fish you are eating is not the species listed on the menu,” said DNA tester William Gergits. The group accuses the industry of “seafood fraud,” and is calling on the federal government to step in to more tightly regulate fisheries and related businesses. An excerpt from the article:

Oceana also today released a new report entitled Bait and Switch: How Seafood Fraud Hurts Our Oceans, Our Wallets and Our Health. The report found that while 84 percent of the seafood eaten in the United States is imported, only two percent is currently inspected and less than 0.001 percent specifically for fraud. In fact, recent studies have found that seafood may be mislabeled as often as 25 to 70 percent of the time for fish like red snapper, wild salmon and Atlantic cod, disguising species that are less desirable, cheaper or more readily available.

And rest assured that when you buy from Frugé, you’re always getting exactly what you ordered.